Gambling Addiction and the Brain Be it sports betting, Internet poker, slot machines, bingo, casino games, scratch cards or the lottery, gambling is now more accessible and acceptable than before. While it’s a recreational indulgence for most, some people can be affected by serious problems due to gambling.

Players who came close to winning games that are based on luck display brain activity similar to players who actually go on to win.

Recently, mental health researchers and scientists decided to categorize problem gambling issues as behavioral addictions. This is the first such move, which places gambling addictions in the same category as substance abuse. This decision was based on solid neuroscience research that proved the similarities gambling addicts share with alcohol and drug addicts, including brain activity and behavioral changes. Having a gambling urge that almost impossible to control despite having serious consequences, is known as a gambling disorder. This can impact one’s mental and physical health, interpersonal relationships and financial situation. However, its classification as a legitimate addiction was done only recently.

This condition was classified under psychiatric disorders for the first time in 1980. Back then, it was named ‘pathological gambling’. It was classified under impulse control disorders that also includes pyromania and kleptomania. 2013 saw it being renamed as ‘gambling disorder’, moving it to the SRAD category that includes drug and alcohol addictions.

This decision underscores how far we’ve come along in our research on substance abuse disorders. The similarities between addictions and gambling have been displayed concretely. Many psychology and neuroscience studies now suggest problem gambling to be similar to a drug addiction. 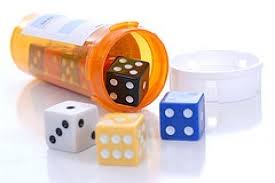 Diagnostic criteria used for gambling disorders are similar to those used for ascertaining drug addiction, such as major disruption in daily life, unsuccessful efforts to quit or cut back that have failed repeatedly withdrawal and tolerance. Highs and cravings have also been reported by problem gamblers.

Jon Grant of Chicago University, who studies addictive disorders, states that people start getting addicted to the highs that gambling provides, causing them to up their bets and risk appetite. When they try to quit, they experience irritability, agitation, and insomnia, symptoms also seen in substance abusers.

Petry states that there could be some brain or genetic differences in those more likely to develop an addiction disorder. Drug addicts and problem gamblers have been shown to share many genetic predispositions that encourage reward-seeking actions and impulsivity.

Most research which supports the classification of gambling disorders with various other addictions come from neurochemical tests and brain imaging research studies. They’ve revealed several similarities between drug abuse and gambling effects on one’s brain and responses given by brains of several addicts to many cues. Gambling and drugs activate reward systems in the brain in a similar manner.

Luke Clark, who is a psychologist working at British Columbia University states that the brain’s prefrontal cortex and ventral striatum are the areas that come up in multiple studies.

Located quite deep within the brain, the brain’s ventral striatum region is responsible for being the reward center. It has been shown to play a key role in substance abuse and reward processing.

Marc Potenza, who is a psychiatrist studying gambling addictions at YSM, stated that similar results were also seen in alcohol-dependent individuals and adolescent smokers, whose ventral striatum activity levels are blunted when they’re anticipating rewards.

While it could seem counterintuitive to suggest that reward pathways have lower activity levels in problem gamblers, scientists believe a reward deficiency theory could explain this finding. They state that people with addiction disorders have underactive reward systems in the brain. These people choose other ways for stimulating reward pathways that include gambling and drug-fueled highs.

The brain’s prefrontal cortex is also involved in substance abuse and gambling disorders. This brain region’s functions include cognitive control, impulse control, and decision making. It has been shown by several studies that this region sees lower activity levels in drug addicts and problem gamblers when it comes to gambling cues.

Studies have displayed that those affected by gambling disorders also take more impulsive decisions compared to others. This may be due to decreased activity levels in the brain’s prefrontal cortex.

Grant stated that there were several kinds of brain processing issues faced by people affected by gambling disorders. Current research shows them to process reward and risk incorrectly along with incorrect processing of long-run vs short term consequences.

It remains unclear if gambling can change brain functioning. While looking at the brains of long-time gamblers will reveal several differences, a cause & effect relationship is still unknown, as per Grant.

People could have variations in various brain functions and structure from the beginning, which caused these gambling problems. It could also be that disordered gambling caused brain changes. It could even be that these two factors could be working together as well.

Clark stated that they were studying gamblers only after they’ve completed several years being an addict. What was needed now were longitudinal studies which proved if the brain changed over time. Steps needed to be taken for studying recreational gamblers, who are still very much in control. They had to be followed for a long time to see if their gambling escalated into bigger problems or not.

Researchers currently studying problem gambling believe that learning about the complexity of underlying neuroscience involved would ultimately help find out individual disorder differences. Neuroscience would be able to classify problem gamblers into separate sections, for whom tailormade treatments could be designed.

The current evidence points at various characteristics that are similar for people having gambling disorders and other such additions. Drugs addicts and problem gamblers are similar in their brain activity and behavior. This has changed the definition of an addiction. While previously thought to have been a chemical dependency, it has now been shown to be a pursuit of rewarding experiences despite serious consequences. These experiences could be highs from winning bets or from drugs, leading to addictive behaviors.